Shape – Streptococcus pneumoniae is an elongated round shape (coccus) bacterium with one end broad or rounded and the other end is pointed (flame shape or lanceolate appearance).

Size – The size of Streptococcus pneumoniae is about 1 mm (micrometer).

Arrangement Of Cells – Streptococcus pneumoniae is arranged in pairs (diplococci), with a broad end in apposition and the long axis of the coccus parallel to the line joining the two cocci.

Capsule – S. pneumoniae is a capsulated bacterium and is present in such a way that a capsule encloses each pair of cocci. The capsule can easily be demonstrated using India ink preparation, appear as a clear halo in a dark background.

Check out the Morphology & Cultural Characteristics of Staphylococcus aureus 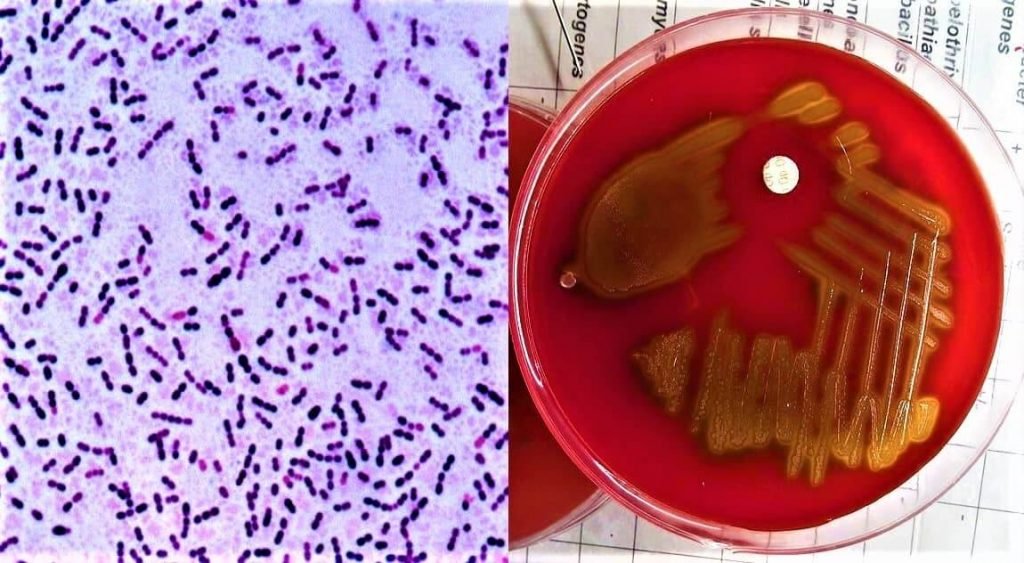 ⇒ Oxygen requirements – S. pneumoniae (Pneumococcus) is an Aerobic and Facultative anaerobic bacterium i.e. can tolerate high levels of oxygen as well as readily grows in an environment with the low level of oxygen too.

⇒ There are various culture media used for the cultivation of S. pneumoniae (Pneumococcus) in the laboratory and most commonly the Blood Agar and PNF medium is used, the media are as follows –

Check out the Morphology & Cultural Characteristics of Streptococcus pyogenes

On prolong incubation of the culture, the colonies become flat with raised edges and central umbonation, concentric rings are seen on the surface when viewed from above and appear as the Draughtsman or Carrom coin-like.

Moreover, the structure of the colonies on the culture media varies from transparent to opaque as per the strain of the Streptococcus pneumoniae. Some strains especially that are the part of Nasopharynx are usually produce transparent colonies and those which causes Bacteremia or Septicemia produce opaque colonies.

In liquid culture media like peptone water and Nutrient broth or Glucose broth, the growth of the bacterium occurs as a uniform turbidity in the broth medium which is further analyzed for the morphology (under the microscope), gram reaction, biochemical tests, and Streptococcus pneumoniae specific tests.

That’s All about the Morphology & Culture Characteristics of Streptococcus pneumoniae

S. pneumoniae in textbook of bacteriology

A Great Hike in Selling of Ashwagandha in Australia Since 2020