MAC medium is a selective medium for Gram-negative bacteria as well as a differential media that different bacteria as Lactose and Non-Lactose fermentors and moreover MAC medium is an Indicator medium that shows two colors of colonies as per the pH – the acidic one as Pink colored and Neutral or basic one as colorless.

This medium is routinely used in Microbiology laboratory consists of various components and each component plays an important role which is described below in detail…..

Pancreatic digest of gelatin – Similar to Peptone or Semi-digested protein, the Pancreatic Digest of Gelatin is a rich source of Nutrients, Vitamins, and Nitrogenous substances that support the rapid growth of bacterial cell especially the gram-negative bacterial cells in MacConkey Agar medium. 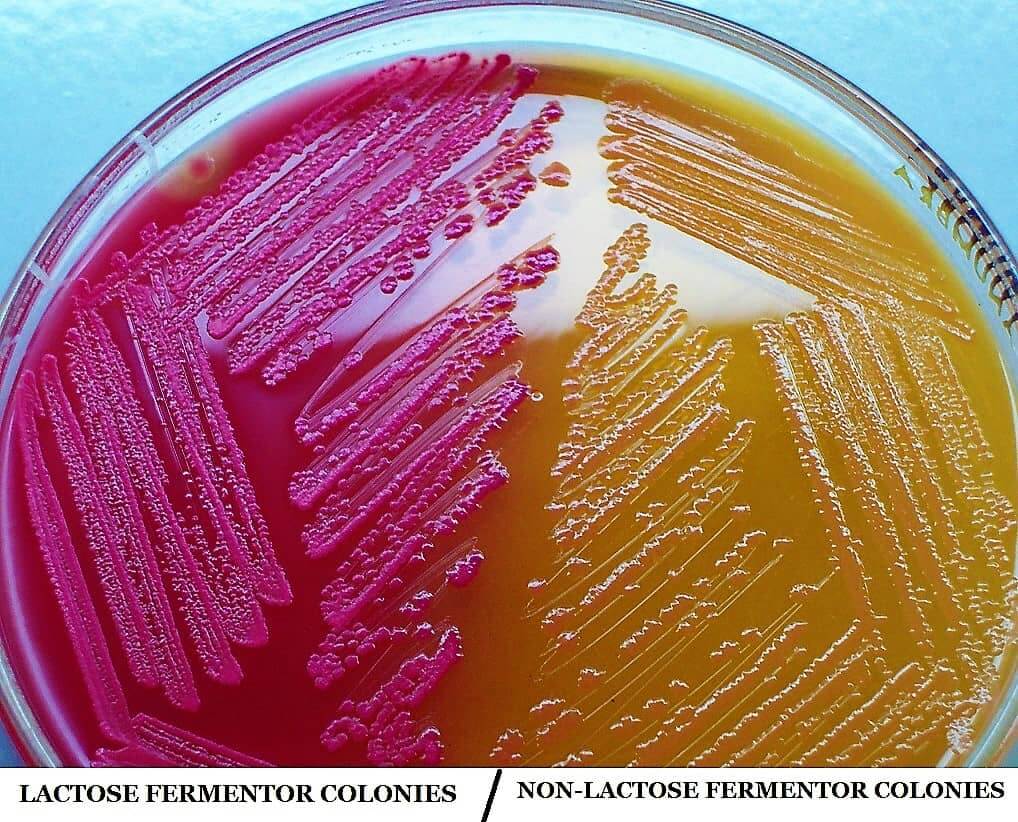 Bile salt – The Bile salts present in MacConkey Agar medium (MAC) is the basis for making MAC a Selective medium for Gram-negative bacteria. It inhibits the growth of most of the Gram-Positive bacteria and many other contaminants so that the Gram-Negative Bacteria can grow with ease in the medium.

Sodium Chloride – The well-known salt to maintain the osmolarity of the solutions plays an important role in maintaining the osmotic pressure in the broth medium so that the movement of molecules takes place in and out of the bacterial cell. It must be present in right proportion otherwise it will lead to the lysis of the bacterial cell.

Crystal Violet – Similar in action to the Bile salts, the Crystal violet dye, commonly used to stain the bacterial cells, is added to the MacConkey Agar Medium (MAC) to make the medium selective for Gram-Negative Bacteria by inhibiting the growth of Gram-Positive Bacteria especially the growth of Staphylococcus species.

Neutral Red – Here comes the main component that makes the MacConkey Agar Medium an effective Indicator medium. The Neutral Red Dye present in the MAC medium is the pH-dependent Dye that changes its color as Pink or Red in the Acidic medium and yellow at pH 8.0 and above. If the Bacterial cell is capable of fermenting the Lactose present in MAC, the pH of the medium falls and the Acidic environment changes the color of Neutral red which ultimately affects the color of colonies which appear as Pink colored whereas the colonies of bacteria which do not ferment the lactose, appears as colorless as there is no change in pH of the medium.

Agar-Agar – The most commonly used solidifying agent for the preparation of artificial culture media in the laboratory, often called as Agar, is a complex polysaccharide, a carbohydrate consisting of 3, 6-anhydro-L-galactose and D-galactopyranose, free of nitrogen, produced from various red-purple algae belonging to Gelidium, Gracilaria, Gigastina etc. It liquefies on heating to 96 °C and hardens into a jelly on cooling 40-45 °C. It basically works as a solidifying agent but also, to some extent, as a carbohydrate source for the bacterial cell.

The final pH of the solutions is adjusted to 6.9 – 7.3 preferably the 7.1 at 25 °C. The above-mentioned components can be modified by adding the various substances in a variety of ways as per the results required so that the rapid and satisfactory growth of the bacterial cell takes place.

Check out the Preparation of MacConkey Agar Medium in Laboratory

MODIFICATIONS IN THE COMPOSITION OF MACCONKEY AGAR MEDIUM

The MacConkey Agar Medium can be modified in no. of ways as per the requirements of the organisms and to prevent the growth of contaminants and to produce a controlled growth of certain microbes etc. The modifications described below are just for consideration and may or may not produce the effective results as described due to the variations in the quality of the components used. However, the composition may vary from lab to lab as per their Standard Operating Procedure (SOPs) and the results required.

The liquid form of this medium i.e. MacConkey Broth Medium consists of only some of these contents as Pancreatic Digest of gelatin (a rich source of vitamin & nitrogenous substances), Lactose (Source of Carbohydrate & basis of differential medium), dehydrated bile (made the medium selective in action) & Bromo cresol purple (an Indicator dye). The final pH of the content is 7.3 ± 0.2 at 25ºC i.e. slightly acidic to slightly alkaline.

MacConkey Agar Medium without Crystal Violet dye is commonly used in many laboratories; is a good differential medium to differentiate Lactose and Non-Lactose fermentors but lack of crystal violet dye make it less selective and do not inhibit the growth of Staphylococcus species and Enterococcus species. The final pH of the content is same as 7.1 ± 0.2 at 25ºC.

MacConkey Agar Medium lacking Crystal violet Dye and Bile Salts is another preparation of MAC medium which is commonly used whenever there is need to prevent the swarming of Proteus species.

Check out the Preparation of Nutrient Agar Medium (NAM) in Laboratory

A Great Hike in Selling of Ashwagandha in Australia Since 2020