Immunity is the state of resistance exhibited by the host body against any foreign particle or microorganisms. This resistance plays a major role in the prevention of infectious diseases. 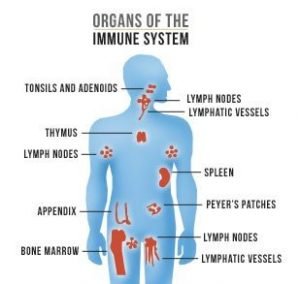 Factors like a skin (mechanical barrier), mucosa of the respiratory tract, saliva (in the mouth), Tears (contains lysozyme) etc. provides immunity to the body.

⇒ Immunity has been classified into two groups as follows –

⇒ It provides the first line of defense against infections.

⇒ Innate immunity is the natural immunity, which is passed genetically from one generation to other generation.

⇒ It does not depend on prior contact with the microorganism.

⇒ It is present in an individual by birth.

⇒ Innate immunity is of two types as follows –

Specific innate immunity have been further classified as –

In Species innate immunity individuals of the same species show the certain degree of resistance towards a particular disease, for example, Salmonella typhi produces Typhoid fever in Man whereas mice are resistant.

In Racial innate immunity within a species different races show different levels of immunity for the same infection this depends upon the type of diet, way of living etc., for example, Negros are resistant to yellow fever and malaria.

In Individual innate immunity, individuals in a population show variation in their response to microbial infection. Every individual show different states of resistance towards pathogens, for example, during epidemics, different members of a family or a community show differences in the level of immunity. Some will develop mild why some will totally escape from the disease. This is due to individual immunity. It is influenced by age hormonal secretions and nutrition etc.

⇒ Acquired immunity is the immunity acquired during the lifetime of an individual. It is not inherent in the body by birth.  It is specific to a single type of microorganism.

⇒ Active acquired immunity is immunity developed as a result of the antigenic stimulus.

⇒ The host’s body takes an active part in the production of antibodies.

⇒ It lasts for a longer period.

⇒ It is also known as adaptive immunity as it represents the adaptive response of the host to a specific pathogen or other antigens.

⇒ The immunity received passively by the host is termed as passive acquired immunity.

⇒ There is no antigenic stimulus; instead preformed antibodies are administered, which were produced in experimental animals like Rabbit & Horse.

⇒ It is less effective than the active immunization

⇒ It is again of two types –

Natural passive acquired immunity is the immunity developed in an individual passively by the external natural source like the mother to fetus and from colostrum to infants.

Artificial passive acquired immunity is the immunity developed in individual passively but produce externally by experimental animal – which produces antibodies actively against the antigen and thus produced antibodies are injected in the individual who is unable to produce antibodies by himself.

One thought on “IMMUNITY”

A Guide to the Different Types of Cosmetic Dentistry

What you need to know About Necrotizing Enterocolitis in Children?

A Complete Guide to Treating and Preventing Frostbite

3 Tips For How CBD Can Calm Your Nerves

What is the future of the Medical Laboratory Experts?

Best Traits To Look For When Hiring A Personal Trainer

Ways to Aid the People with Disabilities

Information on How to Get Help With Drug or Alcohol Addiction

4 Types of Tooth Pain: It May Not Be From a Cavity

3 Ways To Prepare Your Immune System for Flu Season

12 ways to get fit without hitting the gym

A Guide to Caring for Pressure Sores

Trollishly Ideas To Use Instagram Reels Into Marketing Tactics

5 Ways To Deal With A Headache Without Medication

Sativa vs Indica: What to Expect Across Different Types and Strains of Cannabis?