Shape – Clostridium tetani is a slender, rod shape (bacillus) bacterium with a characteristic drumstick appearance due to the presence of spores.

Arrangement Of Cells – Clostridium tetani is arranged singly, in pairs or in short chains. They are pleomorphic organisms.

Spores – The Round, terminal & Bulging spores are present in C. tetani giving the bacterium a characteristic drumstick shape appearance when examined under the microscope.

Capsule – C. tetani is a capsulated bacterium. The capsule can easily be demonstrated using India ink preparation, appear as a clear halo in a dark background.

Check out the Morphology & Culture characteristics of Clostridium perfringens

⇒ Optimum temperature – Clostridium tetani range from 14 –43°C as per the strain, usually grown at 33–37°C in laboratories. 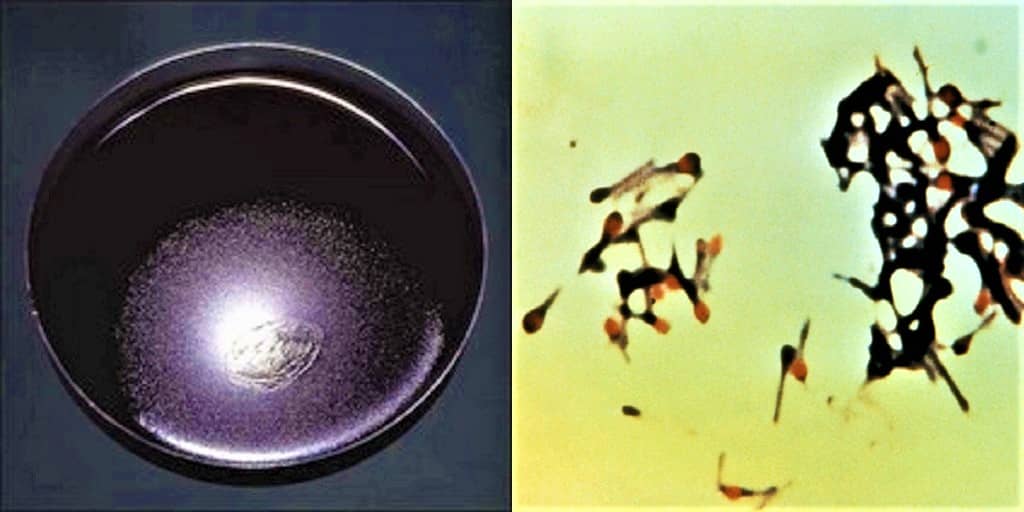 ⇒ Oxygen requirements – Clostridium tetani is an obligate anaerobic bacterium i.e. can only grow in the absence of oxygen (Strict anaerobe).

⇒ There are various culture media used for the cultivation of C. tetani in the laboratory and most commonly the Sheep Blood Agar medium and CMB medium is used, the other media are as follows:-

Check out the Morphology & Culture characteristics of Corynebacterium diphtheriae

In Sheep’s Blood Agar medium with normal agar content (1.5%), the growth of Clostridium tetani appears as swarming layer over the surface of the medium. By increasing the content of agar in the medium to 3%, prevents the swarming and individual colonies of the bacterium appear on the Medium. Initially, it shows the alpha hemolytic colonies followed by the beta hemolysis which is due to the action of tetanolysin (a hemolysin toxin produced by C. tetani)

Similarly, in Nutrient agar medium the growth of Clostridium tetani appears as a swarming layer throughout the medium, the layer is so thin and transparent that it is difficult to observe via naked eyes unless you are an experienced microbiologist.

In Roberson’s cooked meat broth medium, C. tetani grow well, produce turbidity and the meat is not digested but may turn Black especially on prolonged incubation. It also produces gas and turns pH of the medium Acidic.

In liquid culture media like Trypticase soy broth or Nutrient broth, the growth of the bacterium occurs as a turbidity in the broth medium, which is further analyzed for the morphology (under the microscope), gram reaction, biochemical tests, and Clostridium tetani specific tests.

Moreover, a different technique which is specific for the cultivation of anaerobic microorganisms is employed for the isolation of Clostridium tetani, known as the Deep agar Shake Culture in which the specimen is inoculated by shaking in freshly prepared agar medium before it solidifies. The Clostridium tetani colonies appear as spherical fluffy balls, 1-3 mm (diameter), filamentous with the radial arrangement in the medium.

One thought on “MORPHOLOGY AND CULTURE CHARACTERISTICS OF CLOSTRIDIUM TETANI”

What is Anorexia and How Does it Work?

The Benefits of Alkaline Water: Better Than Plain Water?